Billboards: Tried and True and Still Good for You

As the official old-timer of our agency, I will go ahead and play to stereotype and not write about the latest trends in social media or the newest technical innovations to disrupt healthcare marketing. No, I will write about perhaps the oldest medium of all: outdoor advertising, in particular, the billboard.

Because billboards still work. And, if done well, they work very effectively for hospitals and other healthcare organizations.

It goes without saying that billboards allow you to target a broad demographic sweep of the population and that they are great for high frequency of exposure. Since the earliest days of advertising, billboards have proved effective for building brand awareness. And for our clients, we’ve found billboards handy for announcing new locations of hospitals, outpatient centers and urgent care centers.

But do they work in driving volumes and brand preference?

John L. Fortenberry, Jr., in the March-April 2010 issue of the Journal of Healthcare Management, reports on a field study of an urgent care center’s billboard advertising campaign in Louisiana. It showed that not only are billboards effective for promoting awareness of your healthcare brand, they also positively affect the buying decision.

Out of 1,640 patients surveyed, 79.3 percent reported the billboards to be moderately or highly informative. More important, 63.6 percent of survey respondents indicated that the billboards at least moderately influenced their visit to the urgent care center. Regarding their opinions of billboards as an advertising medium, 74.2 percent had positive views.

You can read the full study here.

At bp|d, we’ve moved the needle for several clients through campaigns that relied largely on billboards. For Jacksonville’s St. Luke’s Hospital, we increased ER volumes by 20 percent in only two months. See the case study here. For St. Vincent’s HealthCare, a billboard campaign produced a 69% positive recall of the brand and had raised its top-of-mind awareness to number three in the marketplace from number four.

As the crotchety old-timer that I am, I happily note that billboards avoid many of the pitfalls of newer media.  “Billboards have a degree of immunity to the audience fragmentation, clutter, ad blocking, and attention-span problems facing other media,” says Fortenberry in the above report.

Though billboards have been around for more than a century, they are not frozen in time. They are, in fact, benefitting from new technologies. Digital billboards, of course, allow for rapid switching out of new messages once yours is beginning to go stale from over-exposure. And there are interesting new ways to attract attention to your boards, such as electroluminescent billboards that light up at night.

So how do you produce effective billboards?

Keep the headlines short and overall copy to a minimum. Clever headlines help (but I’m a copywriter, so of course I’ll say that). Don’t count on your audience having more than a couple of seconds to process your message. Avoid subheads, captions and other clutter than will go unread or distract readers from your main message. On busy, urban highways, drivers can’t afford to take their eyes off the road long enough to process too much information.

Go for eye-catching visuals. That means images that are unexpected, dramatic or humorous. Using extensions to allow images to bleed off the board can really grab eyeballs. Three-dimensional objects, such as mannequins, can make billboards incredibly arresting (think of the Chick-fil-A cow billboards).

Try to stick with your one main logo.  Adding additional logos, such as healthcare awards, just leads to illegibility and confusion.

Based on these criteria, a billboard featuring a photo of a group of doctors standing together, a stock headline touting how brimming with excellence they are, captions for each doctor, a Center of Excellence emblem and your logo, is about as ineffective a billboard as you could produce.

Following are some examples of billboards we produced that were effective because they stood out through their creativity, simplicity, placement or all three. 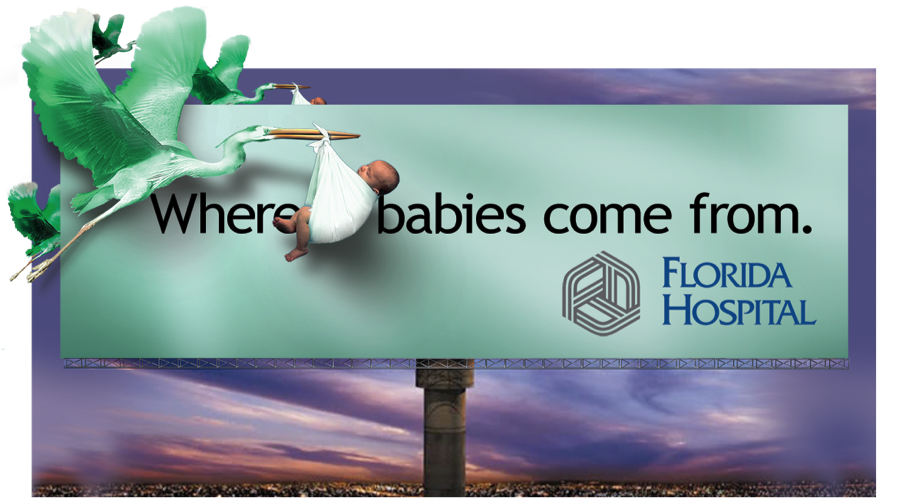 This board used eye-catching extensions and a very simple message to position Florida Hospital as the leading OB facility. 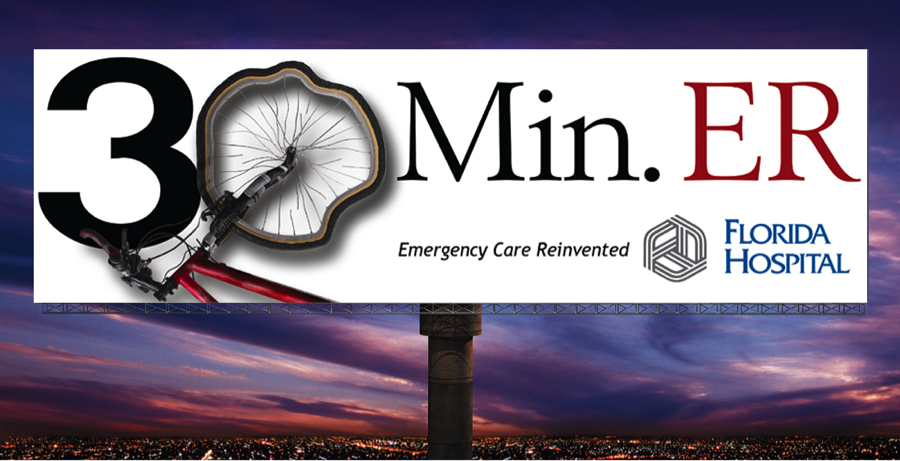 Another very simple board from Florida Hospital that caught a lot of eyes (including those of the Clio Awards judges). 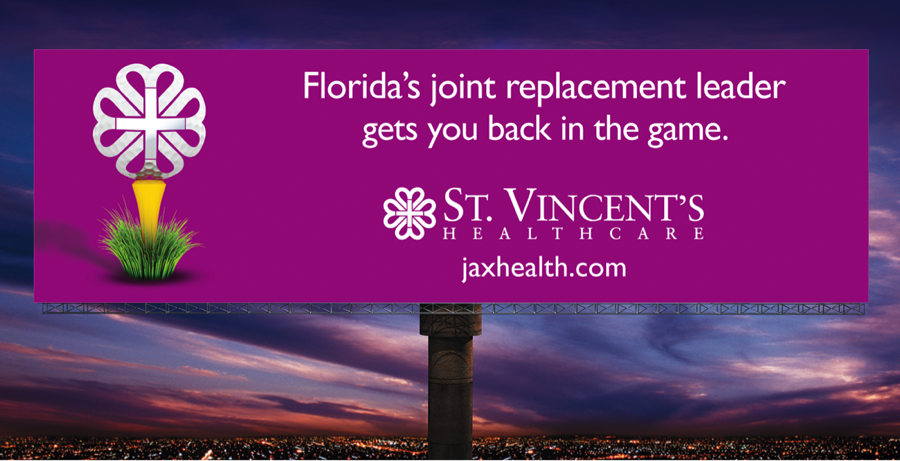 This board and others in the campaign leveraged the mass audience of billboards, blanketing Jacksonville in scores of locations. It raised brand awareness from fourth to third place in the marketplace. 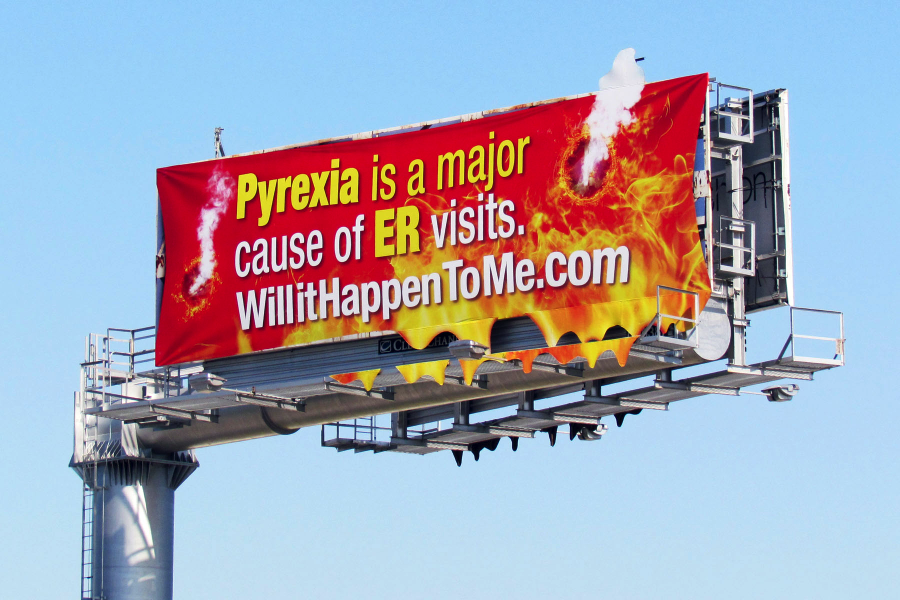 This blind billboard for HCA East Florida grabbed a lot of attention through its unconventional art direction and the curiosity-inducing headline, driving many visits to the landing page that contained ER information and locations. So what is pyrexia? Go to the website to find out! 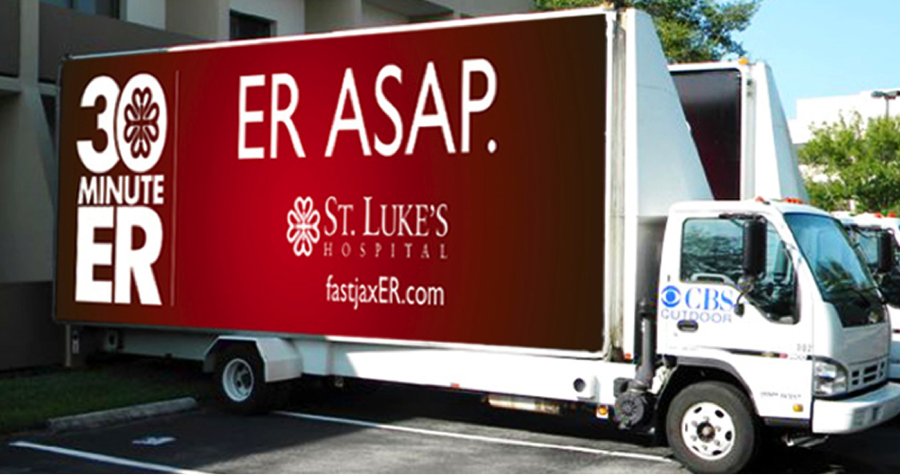 Mobile billboards can overcome the usual criticism of billboards not allowing precise targeting. With mobile boards, you can go to the exact locations where your desired target audience lives, works and plays. This campaign, including stationary boards, increased ER volumes by 20 percent. See the case study here.

To summarize, billboards are still a tried-and-true medium for healthcare marketing and drive both brand awareness and the buying decision. On your drive to or from work today, think about all the people looking at those billboards you pass.  Shouldn’t your messaging be up there as well?

That’s all for now. In a future post, I’ll discuss other out-of-home formats such as bus shelters, mall displays, etc.

Ward Parker is a Partner and Chief Creative Officer of Brown Parker & DeMarinis Advertising. His career has included stints at The Richards Group and McCann New York, with work appearing in the One Show, Communication Arts and the CLIO Healthcare Awards.