With 58 million Hispanics living in the United States, Latinos now make up almost 18% of the total U.S. population.1 Hispanic buying power increased to $1.5 trillion in 2015–an increase of 50% in just five years.2 In fact, if it were a standalone country, the U.S. Hispanic market buying power would make it one of the top 20 economies in the world.3 Yet, despite this fact, many health systems are failing to create a concerted, targeted marketing plan for Hispanics–the largest ethnic or racial minority in the U.S. 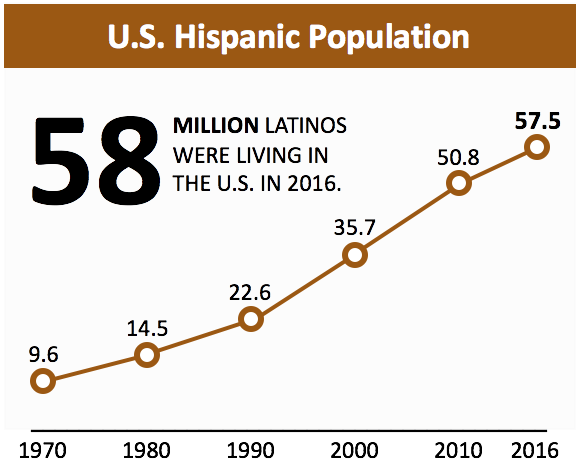 U.S. Hispanic Population Stats
Between 2000 and 2011, Hispanics made up more than half of the U.S. population increase with slightly greater growth than that of all other non-Hispanics combined.4 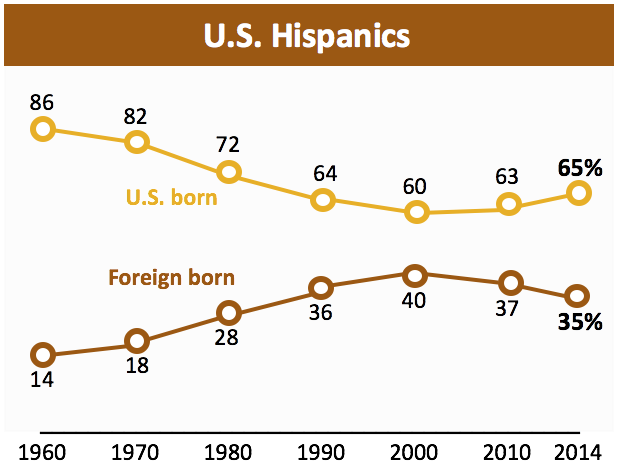 Source: Statistical Portrait of the Foreign-Born Population in the United States, April 19, 2016.

Hispanic Media Habits
It is important that your Hispanic marketing strategy utilize multiple tactics to generate interest, and then ultimately have that interest translate into action. The younger Hispanic consumers (under 35) have different media habits than the 35+ Hispanic age group. The younger group leans more towards digital assets and in particular social media whereas the older age group relies heavily on traditional TV and radio.

Hispanic Messaging
It is important to remember when marketing to today’s Hispanics that they think of themselves as Americans, but are proud of their Hispanic heritage and those meta messages are at the heart of their culture. Family, faith and celebrations are central in the Hispanic culture. If you are seeking to peak their interest, it is important to approach your messaging around one or more of these themes. It is no longer enough to simply translate an ad that was previously developed in English to Spanish. Today’s Hispanics are expecting more from brands who want their business. They want you to speak to them as if you are familiar with their culture and communicate with them as a trusted neighbor or family member would. They want you to speak to them in a reverent tone that illustrates empathy for the challenges they face balancing work and home. They expect that your communication efforts were developed with them in mind first and not an afterthought. This approach of showing them the respect given to a family member and not a targeted group will go a long way.

Hispanic Health Facts
The following are the leading causes of death in Hispanics for 2014. The top 5 causes accounts for 58.7% of Hispanic deaths.15

Cancer and heart disease are the top 2 for both Hispanics and non-Hispanics, but their placement is switched (heart disease is first with non-Hispanics). Chronic liver disease and cirrhosis is unique to Hispanics and do not appear in the non-Hispanics top 10. Understanding the top health concerns of the Hispanic population can help you narrow your focus on your Hispanic marketing efforts with addressing one or two key servicelines at a time.

It is imperative that you have an understanding of today’s Hispanics culture as you begin to design your marketing plan. However, digging deeper into you’re your own market data and identifying their specific trends and needs will allow you to be able to focus on targeted, tailored messaging that will feel genuine to your Hispanic neighbors and will garner better results.

Jason is CEO & Chief Strategy Officer of Brown Parker & DeMarinis (BPD), an internationally-recognized advertising agency that is on a mission to make health systems and hospitals the most beloved brands in the world. A pioneer in hospital marketing, BPD works with clients to unlock the power of their Purpose inside and outside their organizations, resulting in highly engaged employees and physicians and dramatically higher brand preference and service-line volumes.