Marketing to Moms: The New Face of Millennial Motherhood

Everyone has a picture of the “perfect mom” in their mind.  Some draw from mothers they know personally, and some utilize famous moms from television to exemplify the demographic profile and characteristics they believe a mother possesses. For some of us, she is Clair Huxtable, of The Cosby Show. Mrs. Huxtable was a highly-educated professional with her own career as a successful lawyer. Clair was in a long-term committed marriage with her husband and raised five children.

For others, it is Claire Dunphy from the TV show, Modern Family. This Claire is a mother in her late 40s who got pregnant at a very young age and then married her college sweetheart. She gave up her promising career in marketing to be a stay-at-home mom raising her three children. Despite her husband being the breadwinner, Claire eventually returned to the workforce after many years and obviously struggles with work-life balance.

These two familiar characters represent the type of personas that our “moms” marketing generally tries to attract. Although there are obvious differences between them, as marketers we generally lump all women of child-bearing age (25-50) together and occasionally layer in segmentation findings, such as Tapestry® or home-grown CRM data, and feel we understand who moms are.

In a recent Pew Research Center report on mothers in the United States, four interesting trends were identified that should impact the face of the traditional mom marketing persona for your health system.

1. In the United States alone, there are 16 million Millennial mothers…and growing.

Women who fall into the generation segment called Millennials (those who are currently 20 – 36 years of age) accounted for 82% of births in the United States in 2015.1 Yet, despite being the largest percentage of births, they are not having children in their early years. The study showed that Millennials are waiting longer to have their children which is in stark contrast to the women in other generations who traditionally began their child-rearing while in their early 20s. In 1970, women were having their first child at the age of 21. Compare that to 2013, when the average age for a woman’s first child was 26.2

Marketing Implication: It is important to attract this group early and earn its loyalty. Develop marketing tactics to engage with the Millennial mom by using online multi- media tactics, e-mail, text or fashion magazines. They respond best to these. Newspapers and television do not generally appeal to Millennials. In fact, their interest in television is less than any other generation. If they do watch, they tend to watch on- demand TV. 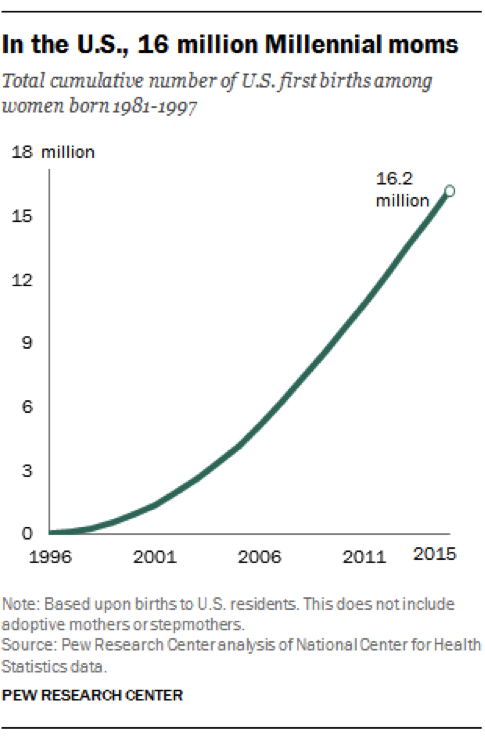 2. Millennials postpone motherhood due to a desire to establish a career and/or further their education.

In 1975, 47% of mothers were in the labor force whereas today, 70% of moms with children younger than 18 have a job.3 Millennials have their own working mothers as their role models. They grew up in a time when opportunities in the workplace for women were expanding and for a large percentage of Millennials, they enjoy the benefits of a dual-income home. However, they are also the generation where the emergence of non-traditional households were taking shape. Single mother households, same sex partnerships and the rise of multi-generational households became the norm for this generation. In addition, Millennials have seen firsthand the impact education has had on the opportunities for the working women in their life, so education is vitally important to women in this generation. There is great comfort for Millennials in being responsible for their own destiny by furthering their education and not putting it off to raise a family.

Marketing Implication: Millennials are extremely focused on learning. Many have life plans already that include obtaining educational goals for every stage of their life. As part of your strategy to appeal to the Millennial mom, introduce them to your new services on a consistent basis. Position your marketing as less of a sales pitch and more of an opportunity for them to learn more about services that can make their life easier and/or better. Entice them to interact with your brand by offering opportunities to expand their own knowledge.

Although it remains a constant that women with less education tend to have more children overall than highly educated women, there is a rise in the number of highly-educated women choosing to become moms. In 2014, 60% of women ages 40 to 44 with at least a master’s degree had two or more children–up from 51% in 1994. At the same time, roughly one-in-five women ages 40 to 44 with a master’s degree or higher (22%) had no children in 2014–down from 30% in 1994.4 Concurrently, the four-child household is declining and is being usurped by the rise of the two-child family. As a result of their additional degrees, many women are on a managerial or leadership track. These positions contribute to the struggle many moms have trying to balance their home/work lives.

Marketing Implication: Approaching your messaging to moms from a place of empathy–understanding their struggles with work-life balance–will go a long way with these moms. Quick access to information that will help guide them through the healthcare process will be welcomed by them. Asking them what would make their lives easier will  entice them to start a dialogue with you, but do this only if you are willing and able to put their suggestions into place. Think about providing on- demand videos about commonly asked questions or quick newsletters designed for readers who only have  time to skim articles. 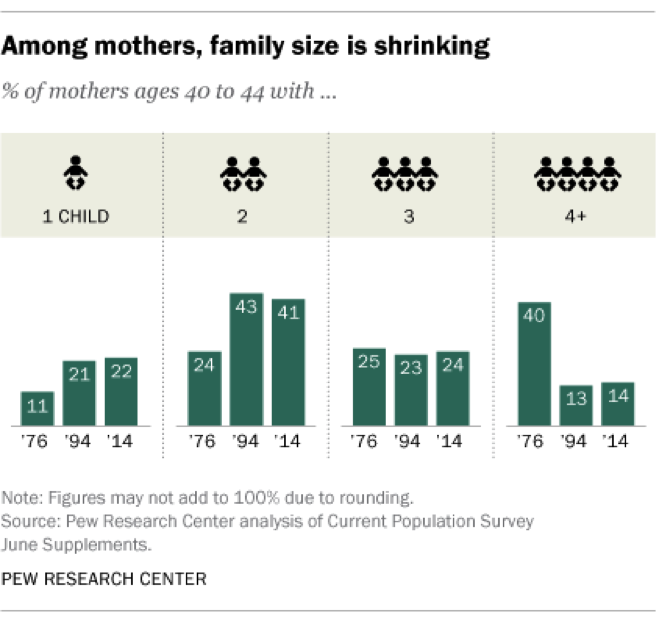 4. There has been a dramatic increase in births to foreign-born women in the US.

Marketing Implication: It is important for you to better understand the traditions and  cultures of the foreign-born women in your market. Knowing their beliefs towards birth  and their approach to raising children should guide your messaging of products and  services. Providing culture-awareness training to your marketing and community  relations team can help their interactions with foreign-born mothers feel more  welcoming.

There is not a “one-size-fits-all” approach that encompasses all of today’s moms, so take advantage of your institution’s segmentation data and tools to refine these target audiences to deepen your understanding. Then, to achieve optimal results, tailor your strategies to appeal to the lifestyles and needs of Millennials, working moms, highly-educated moms and foreign-born moms.

Jason is CEO & Chief Strategy Officer of Brown Parker & DeMarinis (BPD), an internationally-recognized advertising agency that is on a mission to make health systems and hospitals the most beloved brands in the world. A pioneer in hospital marketing, BPD works with clients to unlock the power of their Purpose inside and outside their organizations, resulting in highly engaged employees and physicians and dramatically higher brand preference and service-line volumes.